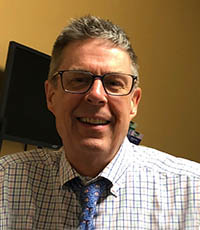 Dr Crawford is a lifelong resident of Massachusetts growing up in Scituate and Weymouth.
Summers in Scituate were the best; sailing, the beach, and tennis made them really fun and memorable.

Clinical training was within the Veterans Administration; the VAMC in Cleveland, Ohio, and the VAMC in Lyons, NJ. These were hospital-based, both medical/surgical and psychiatric training centers.

Dr. Crawford started the full-time Eye Services Department of the Goddard Medical Associates which became part of the Signature Medical Group. He joined the Center for Eye Health 19 years ago on a part-time basis. He has a been provider of primary medical eye care in Brockton for over 30 years.

Dr. Crawford is a lifelong musician/guitar player and has taught guitar and played in multiple musical venues for many years. He enjoys architecture, music study, and running.